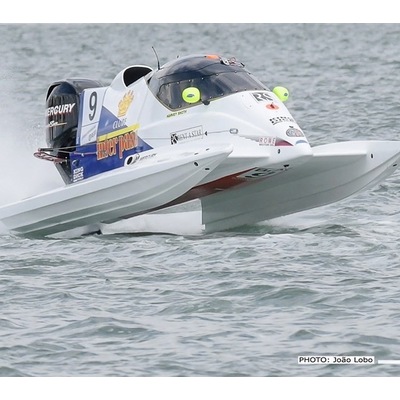 Harvey Smith started racing powerboats after a visit as a spectator at a World Formula 2 powerboat race held at Nottingham national watersports centre in 2012. He became fascinated by the speed and agility of the boats and showed an interest in some of the smaller junior class boats. At the age of nine-years-old,  Harvey completed the RYA junior powerboat-training course and then moved on to racing in some small local club events in the junior GT15 class.

In 2013, he started racing in the GT15 junior class on a more serious but fun basis racing against children from aged from ten to 16-years-old at club events and in the RYA National championship races. Later that year he raced the World GT15 Championships held in the UK.

After a visit to the Formula 1 powerboat race in Abu Dhabi, Harvey was approached and became a member of the F1 Atlantic formula 1 Team as their junior driver still racing in the GT15 class but with a view to him racing for the team in the F4 catamaran class that supports the F1H20 World Formula 1 series in the future.

This boat was a major step forward in terms of design along with new propeller’s that are one of the key elements of performance. This new combination of boat and propeller enabled Harvey to start fighting for the lead in races in the UK and abroad, finishing 3rd in the UK series, 5th in the World Championships in Finland, against one of the biggest entries ever seen with 32 boats competing, and gaining 5th in the European Championships taking place in Tallinn Estonia.

Winning the Norwegian GP in Tonsberg was a great result for Harvey and the team getting his first win at a world championship event.

For the 2016 season Harvey had a new Estonian built boat from the Povvat factory. To race this type of craft here is an immersion test that has to be undertaken where the driver is strapped in simulator consisting of a safety cockpit of a boat where they are expected to experience a simulated accident situation of being upside down whilst being strapped in the cockpit wearing full race attire in a swimming pool where they have to demonstrate the ability to perform a successful release procedure in controlled conditions, quite a challenge for a then 14 year old!

Harvey completed all the training and proceeded to race in the UK under the guidance of his mentor and radioman, Matt Palfreyman, who has raced Formula 1 Formula 2 and Formula 4 boats with some success. Resulting in Harvey competing on equal terms with far more experienced and considerably more mature drivers.

In 2018, he was 4th in the European Championship being beaten from a consistent 3rd place in the heats due to the final points tally.

Within the UK licensing structure you can race in the Formula 4 catamaran boats from the age of 15 in UK events and 16 years for international events. Harvey was keen to start racing in the F4 class as soon as possible as this was the boat class he would race in 2019 alongside the Formula 1 boats. His team has an arrangement to use boats produced in France by the Moore Formula factory.

A new F4 class boat was ordered and delivered so Harvey then had to undertake training in this type of boat again under the RYA powerboat-training scheme. The new formula 4 boat is completely different concept to the GT15 monohull boat with open cockpit and fixed motor position and a top speed of 44mph that he had been racing for a number of years.

The F4 boat is a catamaran design that is designed to float on a cushion of air under the central tunnel, the amount of air is controlled by altering the angle of the engine via a hydraulic ram operated by switches located on the steering wheel the net result being the attitude of the boat is changed this is to gain straight line speed by reducing drag and then altered again to increase the amount of the hull in contact with the water to aid the ability to corner at high speed.

The F4 boat will travel at speeds approaching 70 mph this requires the driver to be strapped into a fully enclosed high strength carbon fibre safety cockpit with a six-point harness similar to a single seater racing car.

His team principle Duarte Benavente and Finnish team owner & driver Sammi Selio have introduced a powerboat academy in Portugal for new young drivers to be trained and learn race craft. Harvey has become the perfect example of a young driver progressing through the various classes of racing and he will attend the academy providing help and instruction and mentoring of young drivers.

Matt Palfreyman will be working with Harvey in 2019 and 2020 and beyond when he is racing in the F1 support series alongside the awesome Formula 1 boats in the F1h2o World Series that will see them race around the world. This is fantastic opportunity for Harvey & his support partners under the guidance of F1 Atlantic team principle and driver Duarte Benavente and the technical team.

Harvey will also compete in the UK & European events in a similar boat to the one he will race in the world series giving him further experience in not only racing but set up and testing.