KDT Powerboat racer Harvey Smith on the podium in China 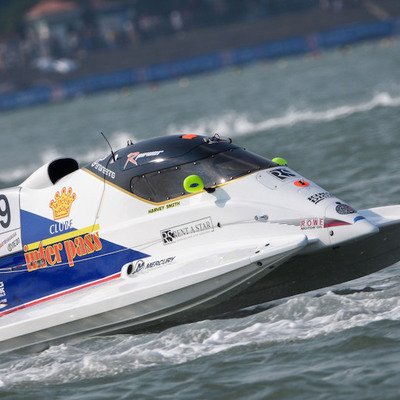 KDT Powerboat racer Harvey Smith on the podium in China

Having taken pole position, Harvey was pipped at the post for victory by Germany’s Max Stilz who clinched overall victory in the F4 Censtar Grand Prix of China after taking his second win of the weekend on Wuyan Bay by just 1.93s

Despite a race long chase and keeping the leader within sight F1 Atlantic’s Smith could not find a way passed and in turn had to stave off the challenge from Abu Dhabi’s Mohammed Al Mehairbi, the duo completing the Grand Prix podium.

Emirates Racing’s Jitprasong Pensukporn ran a solitary race in fourth, but picked up a post-race penalty lap for a jump start dropping the Thai driver to 7th, fourth place going to Victory Team’s Ahmed Al Fahim who made up four places after a poor start and passed Team Sweden’s Mathilda Wiberg on the last left, Wiberg failing to finish the race after leaving the course!, Maverick F1’s Adrien Durand finishing sixth ahead of Adu Dhabi’s Rashed Al Remeithi.

The result leaves Harvey in third place in the Championship, with Max Stilz 32 points ahead of Mohammed Al Mehairbi and 35 clear of Harvey Smith in the championship standings, with 40 points on offer at the final round of the year in Sharjah in the United Arab Emirates in December.